Early this morning we followed the coast of Egypt on our port side and Saudi Arabia on our starboard side, then the coast of Israel and Jordan as we made our approach to Aqaba on Jordan’s southern coast.

Our destination was the awe-inspiring city of Petra, centuries old and located about 2-1/2 hours away through the desert where Bedouins make their homes.  We were so lucky with the weather yesterday and today, where temperatures can soar to the mid to high 40oC.  Both days we have started off with 32oC rising to about 35oC which has been great considering that the Valley of the Kings and the visit to Petra were the two most strenuous days of the whole trip.

The Lost City of Petra was revealed as we made our way through the narrow rock gorge, dwarfed by towering walls.  At the entrance is the remains of an arch, one of its bases is still there.  There is much evidence of towers, obelisks and tombs with inscriptions built into the face of the sandstone and after walking for 2-3 kilometres, we finally emerged into a large square where The Treasury was revealed.  This is an elaborate ancient sandstone building, carved into the rock face and built from top to bottom.  It was featured in the film Indiana Jones and the Last Crusade.  It is believed to have been built as a tomb during the first century B.C.

We walked on the remains of the original pavement and saw where channels had been carved into the rock to convey water to the inner city dating back to the second half of the first century B.C.  The city was built by the Nabataeans and flourished until the 3rd century when this civilisation was mysteriously destroyed and Petra was not rediscovered until 1812.

For those who found the long walk difficult, there were lots of seats spaced along the way and carts, donkeys, camels or horses to ride either one or both ways.  With some areas very narrow, we had to listen for the horses hooves in order to keep out of the way of the carts.

It is summer break in Jordan right now, so there were a lot of children selling postcards.  English is taught in schools and we were amused to hear one very small boy spruiking his wares, calling out “Happy hour” and “Make my day!”’

Jordan is a beautiful country and combines desert with areas of green where the River Jordan flows.  The family unit is very important and we asked our tour guide about unfinished houses as we knew, unlike Egypt, that property taxes are paid before the building is started.  We were told that in Jordan, the second storey is built for the son so they have plenty of time to complete their houses. 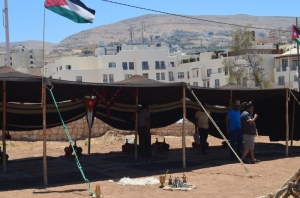 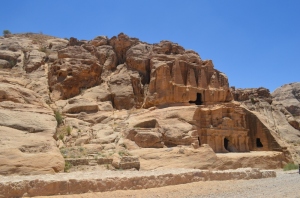 Sewing Beside the Sea