Wasps are common in Australian gardens and can be quite beneficial in pollinating flowers and controlling insect pests.

They can also deliver quite a sting if disturbed, which I discovered recently when I decided to do a spot of pruning around my jasmine vine which is growing on the side of the cats’ catio.

I didn’t see that there was a wasp’s nest hidden in the leaves. I see it now! Before I realised what was happening, two very angry wasps flew out of the nest, one promptly stung me on my hand, and the other chased me inside the house! It was right behind me and I had to shoo it back outside!

Luckily I was wearing gardening gloves, but even so, the sting was painful for about 20 minutes and by next morning my hand was quite swollen. It was also very itchy, but after applying some cream the itch went away and the swelling disappeared within two days.

Some people are very allergic to wasp and bee stings but now I know that I am not. The nest will probably be active for the rest of the summer, but I am okay with that. Everything has its place in the garden and it just means that I won’t be pruning the jasmine for a few more months.

Drought, heatwaves, floods and fire – we seem to have experienced it all in Australia so far this year, and so it was with great relief that we welcomed the rain the day after my last post.

This is my citrus that I posted last time, with its leaves curled up in the prolonged heat – and here is the transformation the following morning, looking like a completely different tree.  There were even a few blades of green grass that popped up during the night. 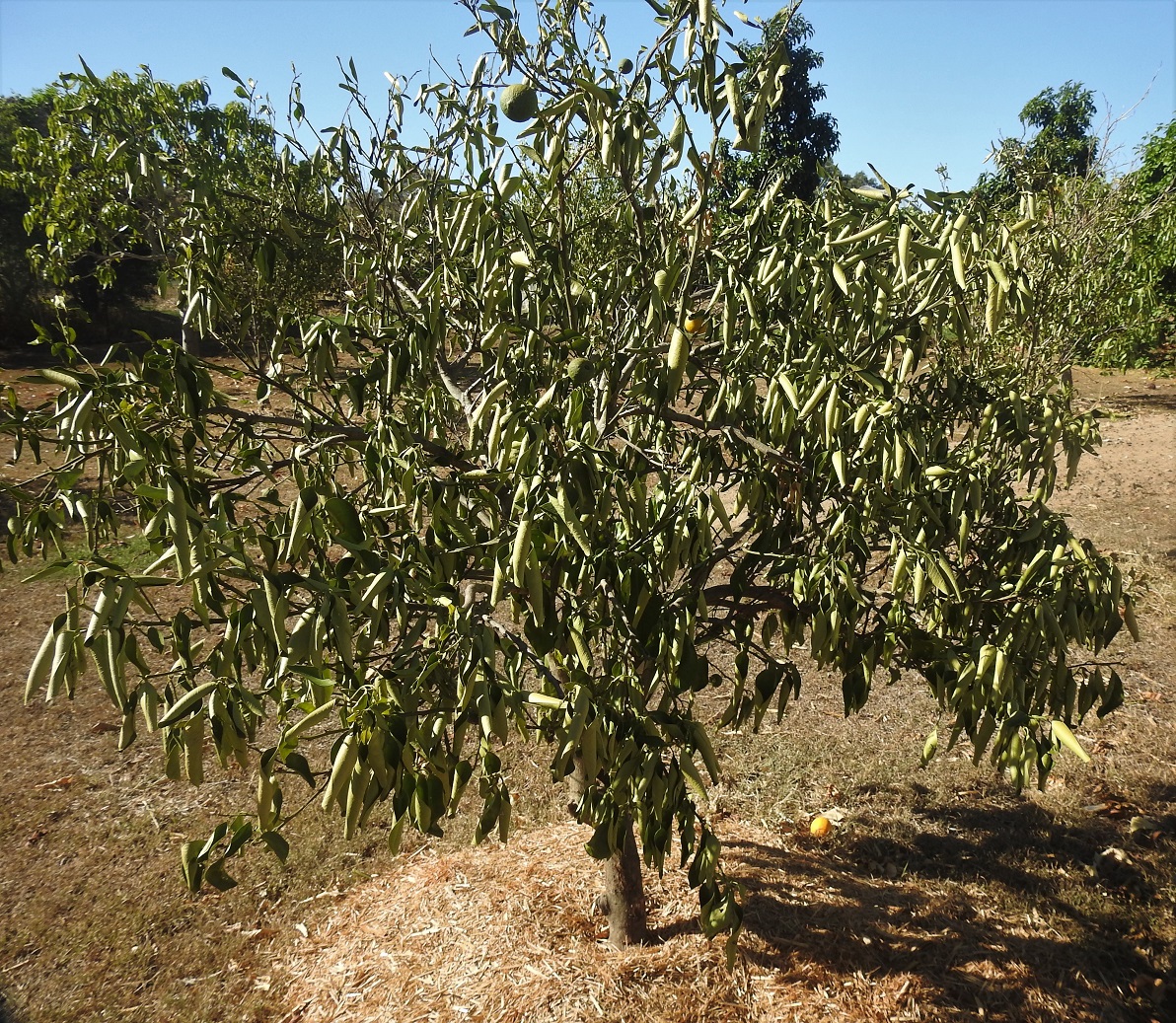 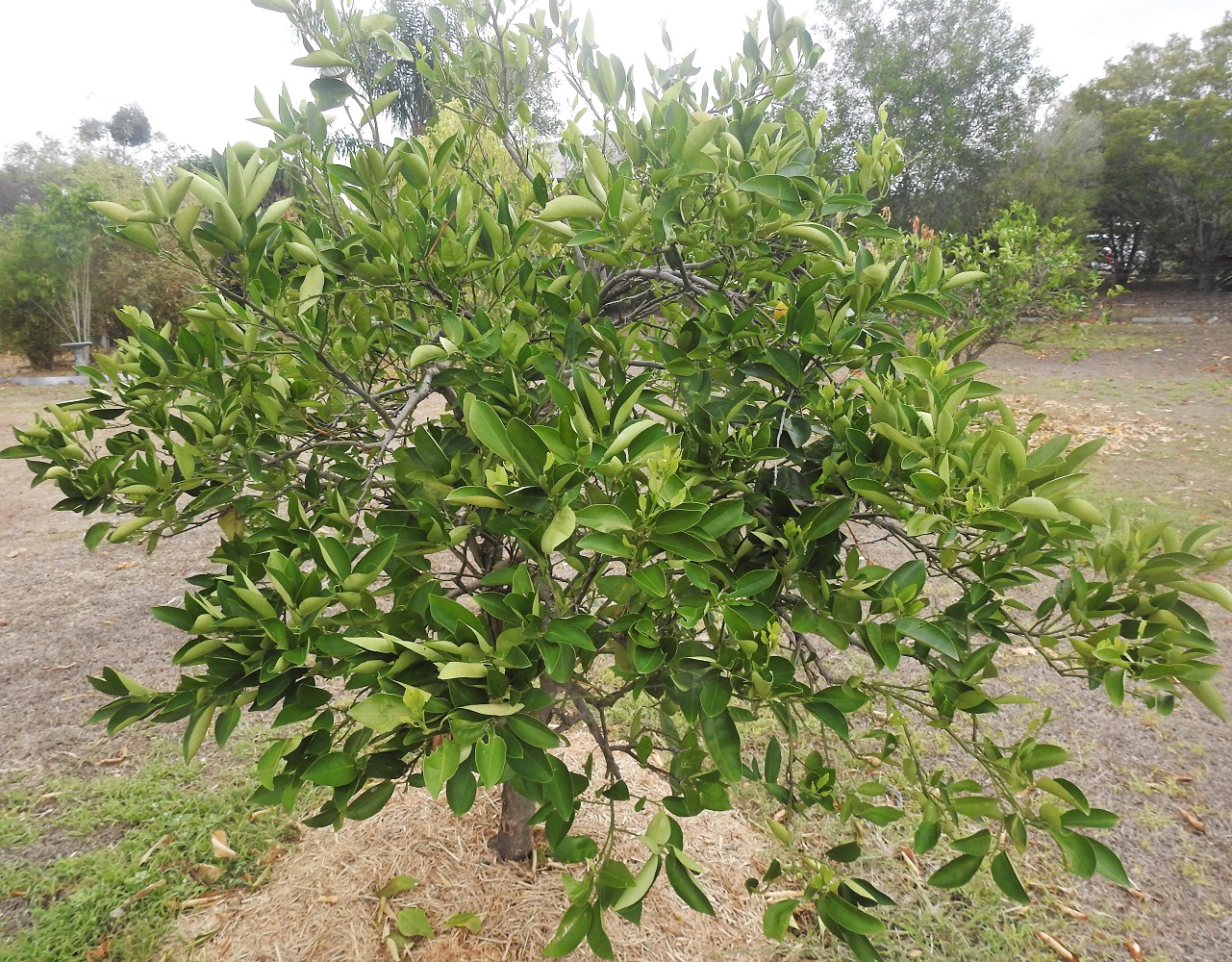 So now our tanks are overflowing and it has been raining on and off ever since.  Amazingly, the grass, which was brown and so dry that it was painful to walk on barefoot, is lush and green and needing to be cut.

I love the sound of the rain falling on the roof and to have some relief from the heat at last.  Blue, cloudless skies are all very well, but for now, my favourite colour is grey!

So the summer is over and I am pleased to say that the tasks that I set myself for the New Year are underway or have been done.  Much crafting has taken place, but more on that later.

More important has been the gardening that I started in January.  Up and out each morning for a couple of hours’ work, mostly weeding and mulching, before the temperature started to soar.  By mid morning it was just too hot to keep going.  Temperatures in the mid to high 30’s have been pretty constant, with some days topping 40 degrees Celsius.  Not much fun when the pool is too hot to swim in and it takes several minutes before the water coming out of the hose is cool enough not to burn. 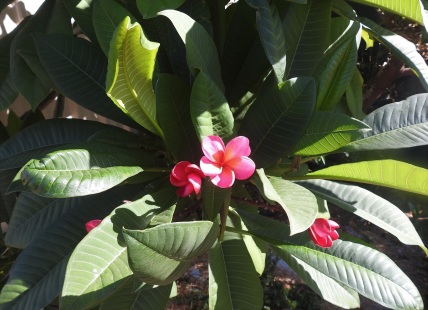 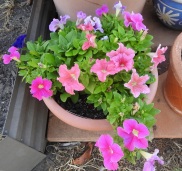 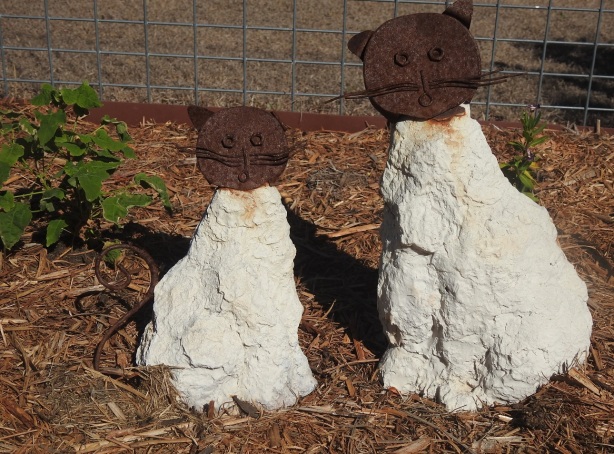 I have gone from gardening for pleasure to gardening for survival – survival of the plants.  One of our two water tanks is empty which we use for watering the gardens.  Lucky we have town water and not reliant on them for supplying water to the house but it has made it difficult to keep the water up to the trees and shrubs.

We’ve hardly had any rain this year and each day we have our hopes up, only to be disappointed when we see another cloudless sky.

This is one of our poor, sad looking orange trees.  I am watering them when I can but unfortunately citrus like lots. The rest look about the same with their leaves curled up.  Citrus is not a good choice for this region, but as they were already here when we moved in I have been trying to look after them as best I can.  Our grass (I could not even loosely describe it as lawn) is so dry it crunches underfoot.  However the frangipanis, petunias and most of the other plants are surviving.

We are supposed to get rain today and it is looking very overcast  Is that thunder I hear in the distance?  I hope so. 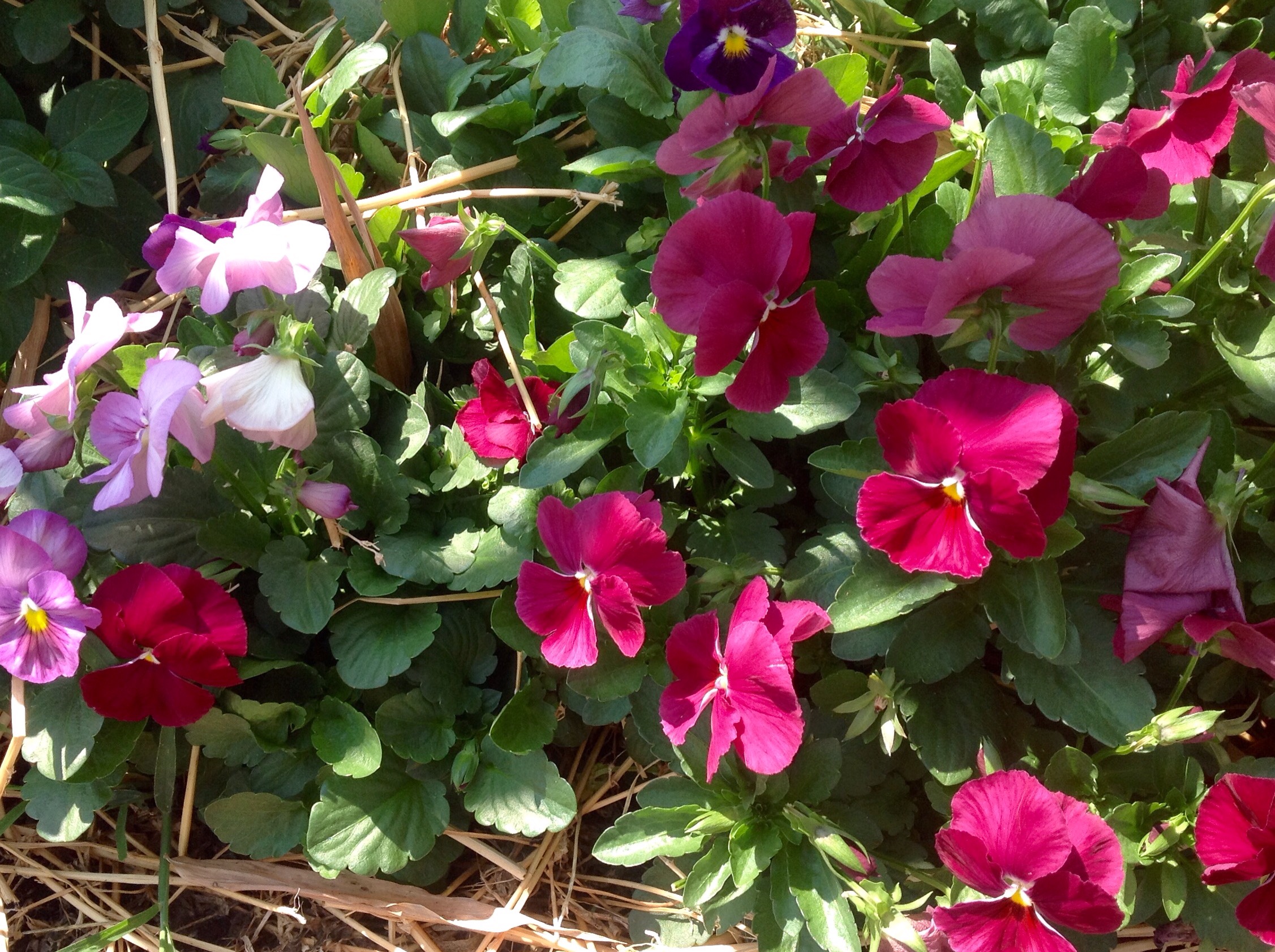 Despite the heat, my little pansies are surviving

After a quiet winter as far as blogging goes, I’m back again.  My posts may have been inactive, but I was very actively enjoying everyone else’s and reading lots of books, quilting, cross stitching and getting sick with the flu.  Also busy in the garden, pruning, weeding and mulching every tree and plant in sight.

Winter is a nice time to recharge, snuggling under a rug with the cats, eating chocolate and watching movies.  The chocolate part was fun at the time but I’m regretting that now I’m back at the gym.  I see some hard work ahead!

Now we are officially into Spring, but it feels like we have jumped straight into Summer!  The temps have been soaring in Queensland to mid 30’s (c)!!!  Everything is dry and brown and the fire danger is high.  Yesterday we had a brief storm which resulted in about 5 mls of rain, but we need so much more.  The grass is actually crunching underneath my feet, but hopefully we’ll get some good rainfall soon and everything will suddenly turn green again.

Just back from a nice little getaway in New Zealand.  More on that next time. 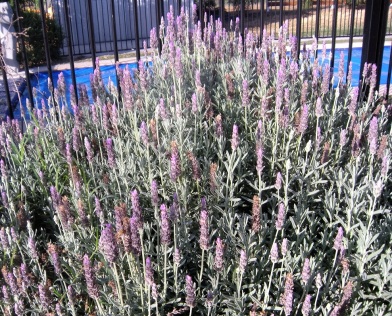 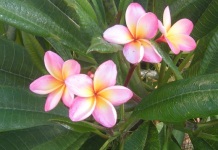 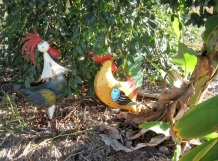 Yes – catch up time!   On weeding in particular.  It’s taken me a few days to look closely at the garden after being  away for over a month.  The first reason was because the grass was so high that I couldn’t actually see the garden, and secondly, I just didn’t want to know how much work was in store for me.  As you can see, I have some work to do! 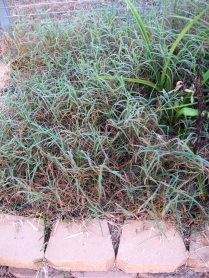 The grass is taking over! 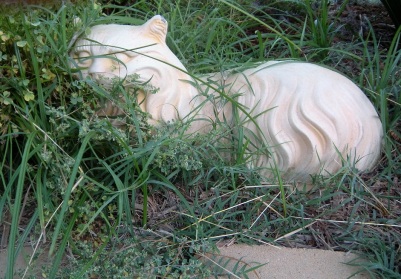 I don’t know about you, but when I have catch up on chores like sorting out the filing system, cleaning out the fridge or in this case – weeding, I tend to procrastinate for an inordinate amount of time, only to realise that the job would have been over and done quite quickly had I just got in there and made a start straight away.

So yesterday I bought a magazine featuring some garden ideas.  But rather than making me feel like rushing forth armed with my favourite gardening implements, I compared my bit of weed covered earth with the glossy images of perfect tropical paradise, which the owner modestly proclaimed was a bare, wind swept desert only a year ago, and wondered why I haven’t achieved a lot more in the last two years.

One step at a time, I remind myself, so on that note I will venture out and start on the cat’s garden.  This was last year’s project of which I was quite proud – after much consultation on the web, a cat’s paradise of only  good, safe plants such as  herbs, rosemary and lemongrass.   As I lovingly tended it, I could just picture the two cats finding shady spots to laze on a summer’s day, nibble on cat grass and roll in the catnip. 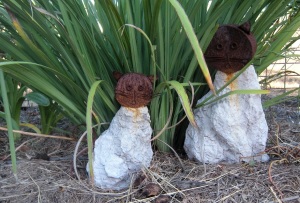 Unfortunately, the reality was that after some time exploring said garden, Samurai discovered, after 6 years of doing nothing more active than chasing the odd garden lizard which always got away, that he could jump the fence and became far more interested in exploring next door’s open, empty patch with hardly a plant in sight!  Higher fences proved no challenge, with the result that the cats now have three connecting cat enclosures;  so rather than being in the garden they now look down on it. 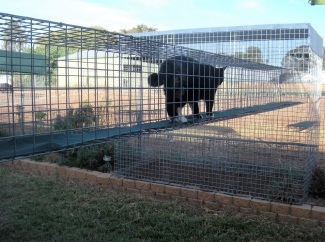 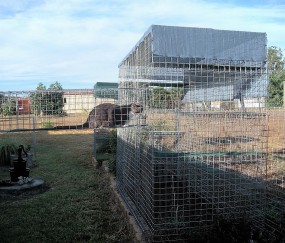 Even so, the least I can do is to give them a weed-less view!

Feather Stitching
Ever The Crafter