Our excursion began with a trip to Dhobi Ghat, known as the world’s largest outdoor laundry where much of the city’s laundry is done at quite a cheap rate.

Next we jumped on the train for a short ride which ended at Churchgate station.  That was exciting – get on the train quickly or it just takes off without warning after a minute or so.  We found out that there are some optional carriages for men, women and senior citizens to board separately.  We realised why when it was explained that out of the city’s population of 18 million, 5 million people catch the train to work each day and 2 million catch the bus.  Everyone is in hurry and getting on and off the train quickly was quite a feat.  Also there are no doors on the carriages so it’s a mad scramble to get on and off.

At the station we were able to see the famous “dabbawalas”, known for delivering meals to thousands of people at their workplaces in the city.  Metal containers are divided into 4 sections, each containing a box filled with vegetables, roti, curry and rice.  Empty containers re then returned at the end of the day for the wife to pack her husband’s lunch for the next day’s pickup.

Taxis are plentiful and relatively cheap, and we saw them carrying 5 or 6 adults plus children.

We also visited Crawford Markets, which was divided into a bird and food market.  Watch where you walk as it was not very clean and I noticed that pieces of cardboard were placed over holes in the concrete… we certainly had to watch where we were walking!

The last stop was at the famous Gateway of India where the coach dropped us off as there was no parking.  It was quite nice to see it come back to pick me up after standing in the rain for ten minutes whilst Alex stayed in the bus.

My memory of Mumbai is of an exciting, noisy city, where everyone drives with one hand on the horn!  There seem to be no road rules, motor vehicles ignore traffic lights and crossings and pedestrians duck and weave across the road.  We were quite pleased to cross the road via the subway!

We loved our first visit to Mumbai where this excursion enabled us to immerse ourselves in the culture of India. 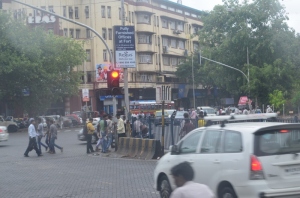 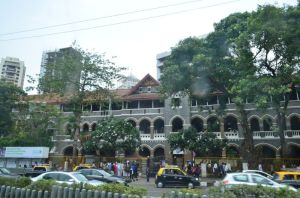 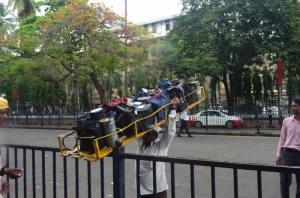 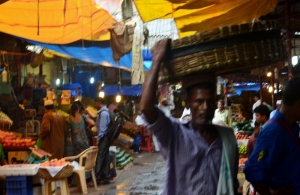