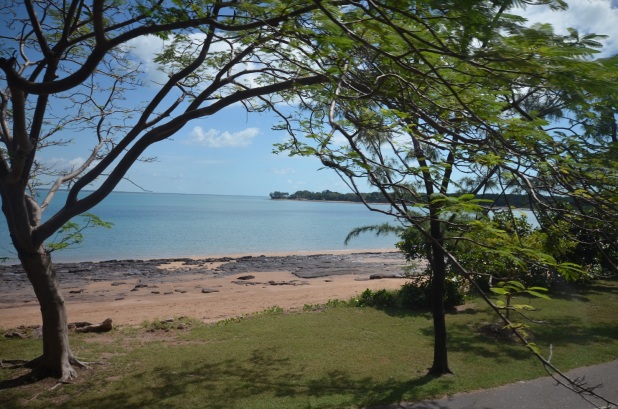 Brisbane was experiencing some cooler weather as we departed for Darwin for the start of our train journey on the Ghan a couple of weeks ago.  Following a 3 hour flight, we arrived to much warmer weather and immediately regretted that we hadn’t thought to pack our swimmers.  The pool at our hotel looked very inviting.

We were booked in for two nights, so we stopped by the information centre to find something interesting to do the following day.

We decided on the Hop On-Hop Off Bus, and it proved to be great value for money.  We rode the bus all day, as it did a different route in the afternoon, and we came away with a lot more knowledge than when we arrived.

We learned a lot about pre-war Darwin, wartime Darwin and Cyclone Tracy.  We were very surprised to find out that when the Japanese bombed Darwin in 1942, a greater number of bombs was dropped that day than were used in the attack on Pearl Harbour.  For generations the country was kept in the dark about the true dimensions of the Japanese attack and I think a lot of people probably still don’t know.  We didn’t.

On the other hand, most Australians are very familiar with Cyclone Tracy, a tropical cyclone that hit Darwin in the early hours of Christmas Eve, 1974, the worst one ever recorded which virtually destroyed Darwin. 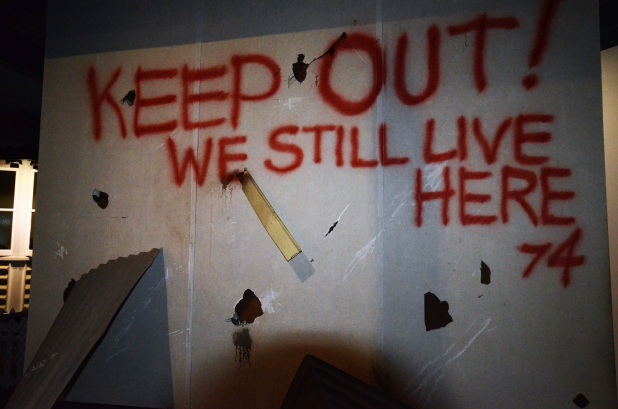 A hand painted sign on an original house wall.  Looters were a problem when approximately 35,000 of the 48,000 residents were temporarily evacuated.

We visited several museums that covered a lot of this history;  you can stand in a darkened room, where you can experience the sounds that would have been heard when Cyclone Tracy hit.  Quite eerie.

The Military Museum had holograms telling the story of a commanding officer of a US destroyer, who watched the bombing from the water after he was blown out of a small boat while trying to return to his ship.

This museum also included The Royal Flying Doctor Service, with an interesting film on its origins in 1939, as well as being able to discover what it’s like to be inside one of its aircraft. 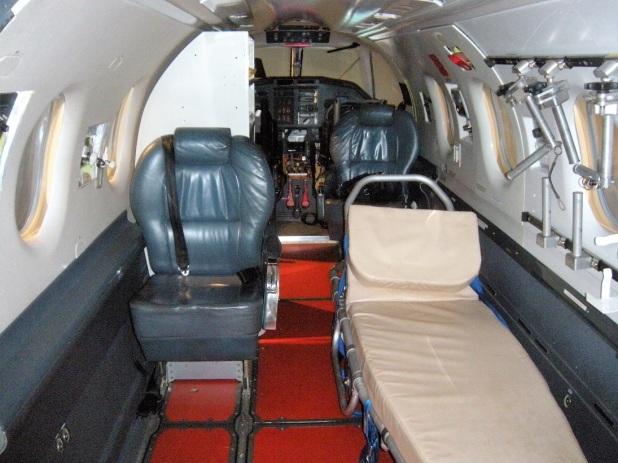 What I liked best was the virtual reality headsets taking you into the battlefront of the bombing of Darwin.  I had to do it twice, it was incredible – 360 degree views on board a ship with the bombs coming down from Japanese planes flying overhead;  then being on the wing of a fighter plane as the pilot ducked and weaved and finally being hit and falling out of the sky with the pilot down into the fiery sea.  Not for the faint-hearted! 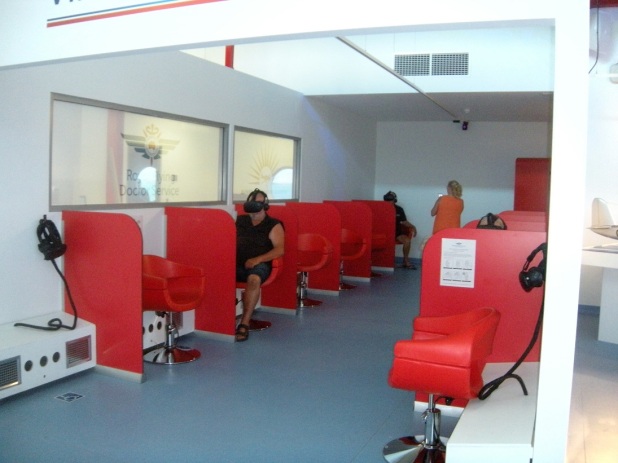 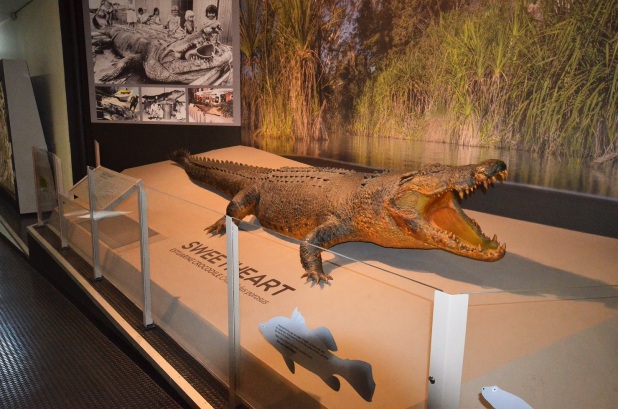 Sweetheart was a 5.1 metre, 780kg saltwater crocodile responsible for attacking dinghies and fishing boats between 1974 and 1979 in a NT river.  He now resides at the Museum and Art Gallery of the Northern Territory.

A huge termite nest.  We saw a lot of these from the train – not as big as this one, though! 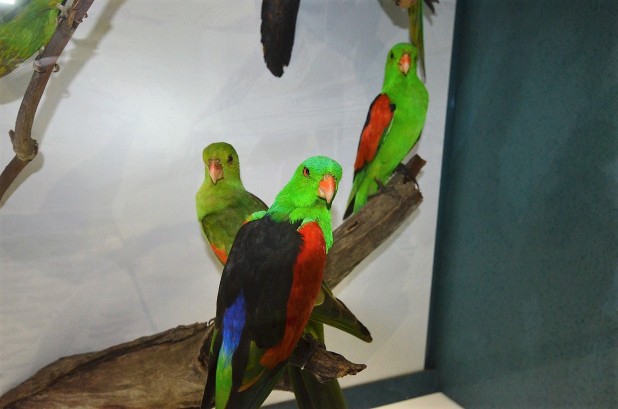 Australia has many beautiful native birds.  Here is a red-winged parrot.

(Just in case you are thinking this looks familiar … somehow I lost parts of my original post so I am publishing this again!)

The Ghan is regarded as one of the world’s famous rail journeys, travelling from Darwin to Adelaide through the heart of Australia.  We were lucky enough to take this journey a few weeks ago and can highly recommend it as a way to experience the dramatic and ever changing landscape that is Australia.

If you are wondering about the name of the train, we were told that when the first camels were imported with their handlers from Afganistan, about 150 years ago, to explore the interior of the country, these pioneers soon became known as Afghans;  which was then shortened to “Ghans”.  The emblem of an Afghan on a camel can be prominately seen as you board the train.

Although we didn’t know it when we booked, we were on “The Expedition”, the first special trip of the season, which gave us a 76 hour trip instead of 54, meaning more time at Alice Springs and a stop at Coober Pedy, so that was a lucky break!

The train had 250 passengers and 38 carriages including two locos.  Our cabin would have to be described as “cosy”, consisting of upper and lower bunk beds, the lower one converting to a three-seater lounge during the day, and a private en-suite.  The secret is not to pack more than necessary, as there is nowhere to put anything away.  We took two small bags – I don’t know how other people managed who were going on board with suitcases on wheels! 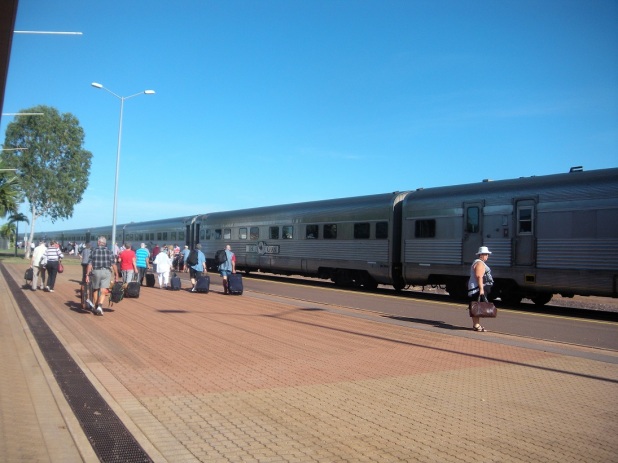 However, we spent most of our time in the lounge and bar carriage or the restaurant where we were treated to excellent 3-course meals, all drinks covered ias well.

There were lots of tourists on board, so the meals had a distinct Australiana theme – kangaroo steaks, crocodile sausages and beef cheeks  … very nice!

Also included in the price were the off train excursions so we thought it was great value for money.  The staff provided excellent service and we even got chocolates when they pulled down the bunk bed every night.

One thing I wasn’t prepared for was the bumpy ride at night.  We woke up a few times getting jostled around when the train slowed down to pull into a siding.  The Ghan has to give way to every freight train, and one night we were stopped for 3 hours.  So I just had to eat chocolates and read my e book until I got back to sleep!