Thursday, 15 March:  When I wrote up Santiago yesterday, I thought we were leaving Chile –  but no, here we are in the Coquimbo region, approximately 295 miles north of Santiago.

With a population of roughly 160,000, La Serena was discovered in 1544 and is located between the Atacama Desert and the country’s fertile central valley, a journey of approximately 30 minutes from the port.

We were given a few hours to explore the central Plaza de Armas, however that didn’t take very long.  There were the usual buildings, cathedral, library, small museum and some other public buildings surrounding a park.  We managed to find the market but there were few souvenirs and it took us a while to find a small keepsake.

Back to the park and sat around until the bus arrived to take us back to the port.  Only a few photos as we didn’t find much of interest there.  Not particularly set up for tourists, in our opinion. 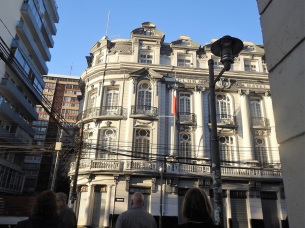 Wednesday, 14 March:  Another day at sea yesterday, which was good as we had to be ready to leave at 6.30am this morning for a full day’s excursion to Chile’s capital, Santiago and the seaside villages of Vina del Mar and Valparaiso.  It was a busy day on board as well, as today was the end of the cruise for many passengers who were leaving the ship today and for others taking their places for the second leg. 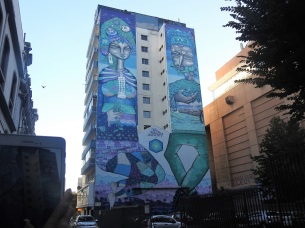 It was a 90-minute trip each way to the 477-year-old city, which sits at the foot of the Andes.  Very interesting, lots of history with modern as well as historic areas, but we have seen lots of trash, especially plastic bags, strewn around the countryside and there’s hardly a building that hasn’t been defaced with ugly graffiti.  Such a shame. 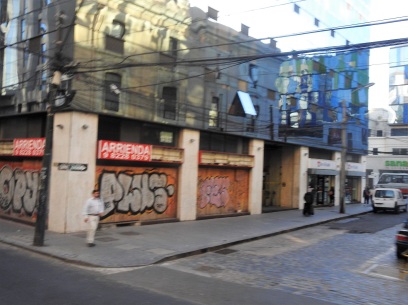 I’ve noticed (with some concern) dogs on the streets, sometimes singly but mostly in pairs.  None of them looked undernourished but our guide explained that people are a bit lax with ownership.  However, they seem to be well fed by shop owners who like to use them as guard dogs.  I was pleased to find out that there is now a new law which says that dogs must have an owner and be micro chipped, so that’s a step in the right direction, although I imagine it will take a while to enforce. 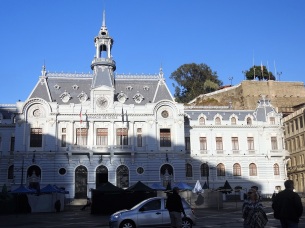 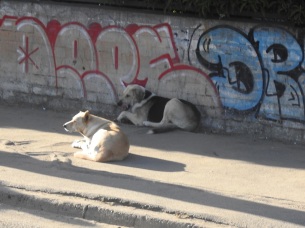 Lunch was salmon once again, although we weren’t complaining as we love it.  It has a lovely flavor, different to what we have in Australia.  I think I’ll be all “salmoned out” though, by the time we get home!  Pisco Sour once again, I’m getting to like that drink a lot.  The restaurant was large and modern, with floor to ceiling windows.  We had a very nice time. 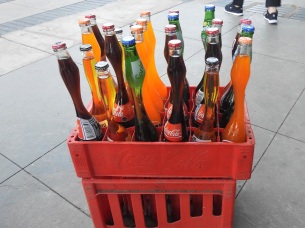 The seaside towns we visited were nice, but nothing much to say about them, just typical holiday spots with beaches, apartments and restaurants, much the same the world over.  We enjoyed the day though, and by the time we got back at 5.30pm feeling very tired, it was time to leave Chile for the last time and head for Peru 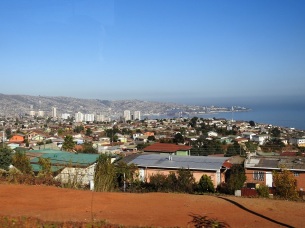 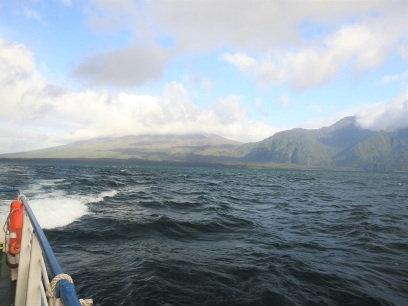 Following a day at sea, today, Monday 12 March, we arrived in Puerto Montt and headed to the Lake District to board a catamaran for a leisurely 45-minute cruise to take in the beautiful scenery around Lake Esmeralda. On the way to the lake we couldn’t help but notice the lack of trees.  Sadly, they were chopped down and set on fire by the German immigrants who wanted farmland and so the redwoods have all but disappeared from the area.  They must have been huge trees, as the locals are still digging up the roots and using them for construction.

It was a little rainy at times, but we managed to get some photos along the way of the rolling hills and snow-capped volcanoes. 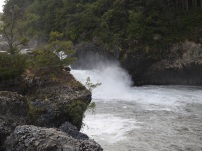 Next stop was the Petrohue Falls, a popular spot for fishing, kayaking and white-water rafting. Unfortunately, there were many people all crammed in to a small area to take some photos, reached by a narrow, central concrete path.  It felt a bit unsafe as a lot of impatient tourists were taking shortcuts by climbing over rocks on each side.  I was afraid that someone would fall but luckily, we all got out of there without anyone getting hurt.

Next was lunch at a local restaurant.  Local salmon which was delicious followed by kuchen, a German tart with strawberries and the national drink, a pisco sour, not sure about the ingredients except for the special liquor and lemon, but it tasted very good.

Last stop was to Puerto Varas.  Nice little town, very similar to others we had visited but it had one different feature, lots of roses along the pavements.  They were getting a bit past their best but still very pretty.

Saturday, 10 March:  Thousands of years in the making, this afternoon we navigated through Chile’s narrow fiords where we were excited to see the unparalleled beauty of the Amalia Glacier.  I was surprised by its’ size – it covers a huge area. Seas were very smooth and only a little patchy rain as we caught sight of the glazier’s magnificent blue ice – made when the ice absorbs all the other colours in the spectrum and reflects primarily blue.  We also saw a couple of dolphins, but they disappeared after a few minutes.

The captain had announced that we would be at the glacier at 4.00pm and sure enough, we arrived right on schedule.  The ship came to a stop and turned from starboard to port to that everyone had plenty of time to take photos and to appreciate this amazing spectacle. 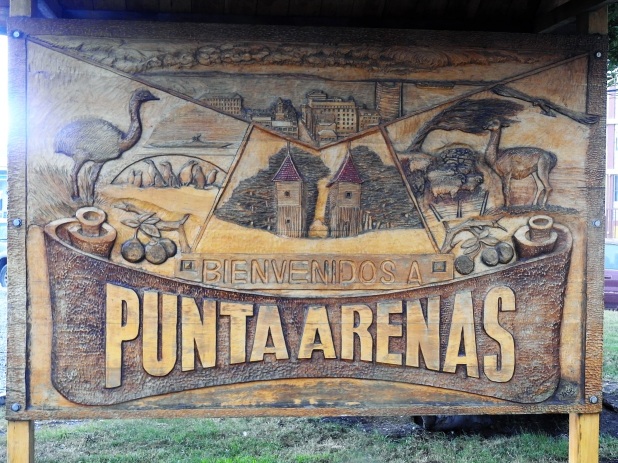 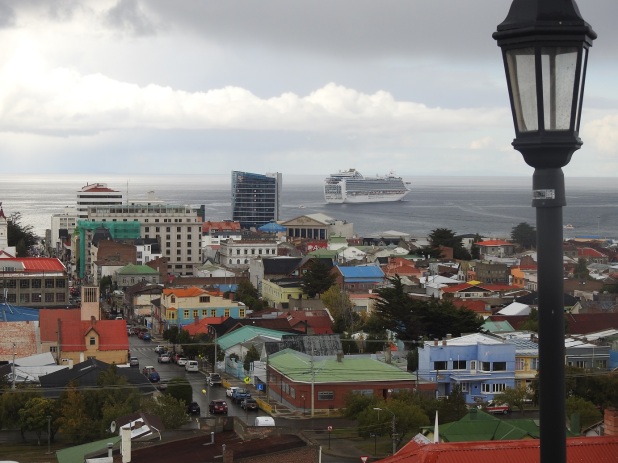 Friday, 9 March:  Our introduction to Chile – Punta Arenas is the world’s southern-most city, just 26 miles from the Strait of Magellan and it’s a lively mix of shopping, scenic wonders and intriguing history.  Our tour took to La Cruz hill which had beautiful views over the town and the Straits of Magellan, then to the Salesian Museum, a testimony to the life of the four tribes of indigenous inhabitants, all extinct now. 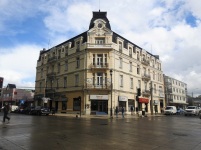 An interesting stop on the way back was to the City Cemetery, where we walked along the avenues lined with cypress trees and magnificent mausoleums.  Our guide, who had been keeping us entertained talking about the friendly rivalry that exists between Argentina and Chile, asked if we had been to the Recoleta Cemetery in Bueno Aires and was very keen to get our impressions of this cemetery; of course, he insisted that this one must be just a little better! 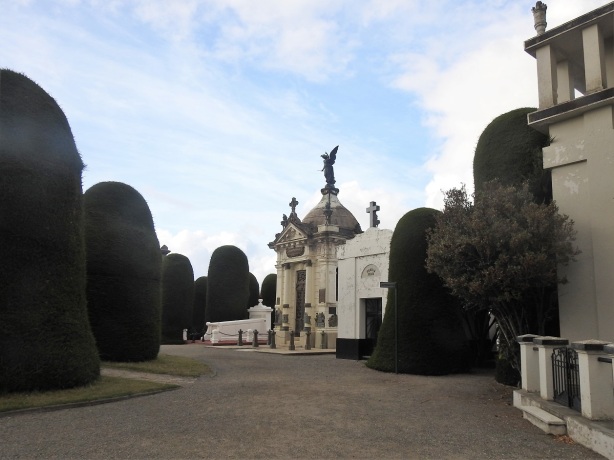 Far from being a lonely little outpost down the bottom of the planet, we were impressed to discover that Punta Arenas is the third-largest city in the Patagonia region; a flourishing city rich in attractions, from the colonial streets to its’ proximity to the icy southern continent of Antarctica.