On Wednesday morning March 9, we witnessed one of nature’s great spectacles.  A total solar eclipse from the Sea Princess.  We were fortunate to have an astronomer on board who gave an interesting lecture yesterday on what to expect and was on the bridge today to give a commentary as the event occurred.

Having set ourselves up on the top deck at around 8.30am we saw the sun rising higher as the moon progressively covered the sun.  We were provided with special viewing glasses, and even then, were warned to only look through them for 10-15 seconds at a time to avoid permanent eye damage.  We were also advised to avoid using our cameras to as not to damage them, so we are relying on the ship’s photographers this time, as they had the correct filters.

Unfortunately, we had some cloud cover so we were not able to see the moon when it covered the sun, however we were able to observe other things that occurred during totality.  Where it had been humid, suddenly it felt very cool.  The light began to disappear like a fast forward sunset, and the ship’s emergency lighting came on.  We were opposite a small vessel and her lights came on also.  At that point, had we not had the cloud cover, for a few minutes it would have been safe to look up without our safety glasses to see the moon fully obscuring the sun.

After exactly 2 minutes 16 seconds, the sea changed colour as the sky became brighter, it suddenly felt quite humid again and things returned to normal.  The whole process took two hours from when the eclipse began.  The captain did a great job, doing his best moving the ship to get us into the best position and stopping for the duration of the eclipse.  However, he could not control the cloud cover!

Even though we did not get to see totality, it was still quite eerie and a once in a lifetime experience.  We were told that, on average, there is a total solar eclipse somewhere in the world around every 16 months.  If you simply stayed at home, on average you would wait between 360 and 410 years.  So we think ourselves very fortunate to be here, and being in the middle of the ocean was a great place to be part of the experience. 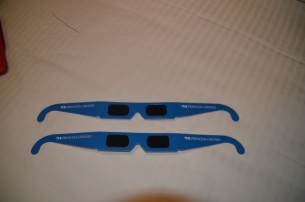 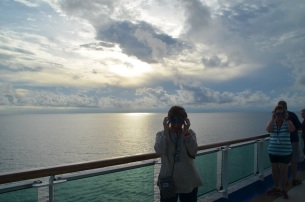 2 thoughts on “A Total Eclipse of the Sun”