A few years ago we stayed in a lovely resort on beautiful Denarau Island, and explored Nadi and the surrounding areas, so it was interesting to arrive in Suva this time to see a different part of the island.

Suva with its colonial buildings is the commercial centre; not a great deal to do there so we jumped on a mini bus (with real air conditioning this time) for a 3-hour tour and headed out of town. We drove through rainforests and coastal areas and passed many villages – groups of houses where families and extended families live in close contact. There are no nursing homes to be found here.

The unemployment rate is very high, about 30% and many people live in very poor housing so that they can afford to give their children a good education. Some houses were no more than small shacks and because it was Monday, everyone had their washing hanging out to dry.

In contrast, we drove through roads where the President, Chief Magistrate and Attorney-General had lovely big houses surrounded by beautiful gardens, tended by prisoners from the local jail. We also passed Government House, residence of the Governor-General. Every two hours, the armed military sentry is changed and our guide we were told that having a photo taken with him was fine as long as we did not touch him or speak to him.

Once back from our bus tour, it was interesting to take a stroll around the shops and then through the market to see the colourful fruits and vegetables, spices from India and many karva stalls.

What I remember most about Fiji is the warmth and friendliness of the people; lots of smiles and waves and greetings of “Bula” met us wherever we went. 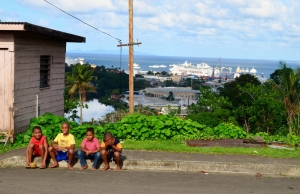 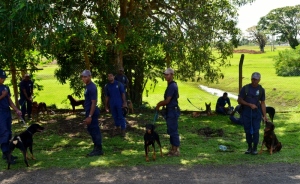 Guess where the restroom stop was! 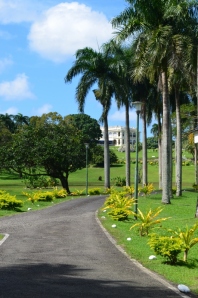 Safety tunnels dug during WWII which were never used 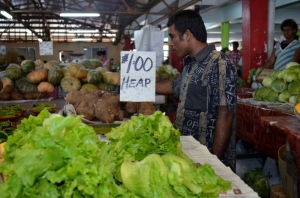 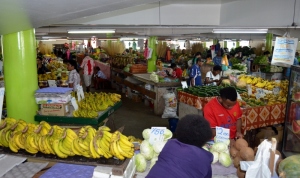 Negotiating the shallows as we left the harbour 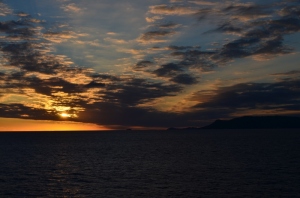 One Chance to See the World
Sewing Scoupe

Sewing Beside the Sea