This morning we arrived in Monte Carlo, which consists of several districts – the Principality of Monaco, is the old settlement, with ramparts above the pretty harbour, La Condamine, on the west side of the bay, combining a bathing resort with small factories and Monte Carlo, the home of the Casino and many fine hotels. There is also a new district, Fontveille, which is the industrial zone, with modern sports facilities as well.

We had to arrive by tender as there were already ships in the spaces at Monte Carlo Harbour. It only took about 15 minutes and then we were able to board our coach for our excursion to Nice, about an hour’s drive away and France’s fifth largest city.

After driving through some tunnels, we joined the coastal road and the scenery was spectacular. Many beautiful houses, well mansions really, have been built all along the cliffs, all with wonderful views of the Mediterranean. We saw the palace on the hill but did not pay E19 each to go inside. Neither did we feel inclined to visit the Casino. Lots of others did, but we did not hear of any big wins!

In Nice the first thing we noticed was that all the tents were up for the amateur Tour de France which starts on Tuesday. Lots of bike riders were there riding around the streets. As it was Sunday, there was not much traffic and a lot of the shops were closed. So instead we explored a nice flower market which also sold various foods and handmade ceramics etc and we were able to find a couple of nice little dishes as a memento.

We had plenty of time to stroll around and the beach looked beautiful but there was a charge of E15 each to go down onto it! To be fair, there were banana lounges and umbrellas supplied. (The free beaches were quite a bit further on.) We didn’t bother and instead walked around the vast marina marveling at the expensive boats moored there, as well as the expensive motor vehicles parked in the street. It certainly is the place for the rich and famous!

My impressions of Monte Carlo and Nice – nice to say that we have been there, but similar to the Gold Coast in Australia, if you get my meaning! 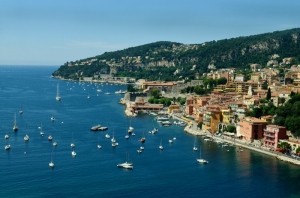