What an enjoyable day in Dubai!  We thought our excursion only covered a trip to the museum, the gold souk and a look at a mosque.   What we got was so much more….

The morning started with a visit to the Dubai Museum in Al Fahidi Fort which was built in 1787 and opened as a museum in 1971.  Much of it is presented as realistic life-size dioramas as well as artefacts and hands-on displays.  Afterwards we headed to the ancient Al Bastaklya quarters, which is famous for its traditional wind towers.

We then traded our coach for an abra (water taxi) crossing the river to Deira where we were able to visit a spice souk, which was amazing,  where Alex was able to buy some liquorice that he hasn’t seen since he left England and looked like a tree twig.  We also strolled around the renowned Gold Souk – a large concentration of jewellery stores where I was very happy to haggle for some jewellery.

Finally boarding the coach again, we were taken to see the city sights, including the Burj Al Arab hotel in shape of a sail, the Burj Khjalifa, the tallest building in the world and the Jumeirah Mosque, one of the most photographed sites in Dubai and a wonderful example of Islamic architecture. 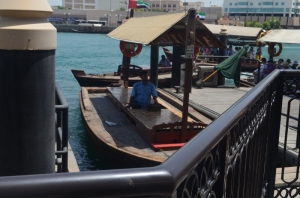 One Chance to See the World
Sewing Scoupe