That’s the message in “The Life-Changing Magic of Tidying Up” by Marie Kondo, a charming little book that I happened to come across about a year ago.  What’s it all about?  Basically, decluttering, or as she quaintly puts it, tidying.  I only noticed this book as it came up in my “Recommended” list on my E Reader, and the Japanese author caught my eye following our two trips to Japan.

This is not a book review per se;  if you want to find out more, Google has numerous sites which explain it all in more detail, or better still, buy the book!  Rather, I wanted to convey how reading  this book has been life-changing for me.  So follow along and you might just learn something! (LOL)

Basically, the idea is not to try to decide what to discard, but instead what you want to keep, by sorting out everything in strict categorical order.  Ask yourself if you love it;  if not, give yourself permission to get rid of it.  That’s it in a nutshell, but there is so much more to it than that.

As to the order of sorting, you start on the easy things, such as clothes, where it’s not too difficult to make quick decisions, then work your way through to the hard stuff, such as personal papers, photos and mementos.  By that stage, the idea is that you would have honed your skills enough to make some big decisions.  How do you get rid of unwanted gifts and expensive clothing mistakes?  Marie explains how – and no feelings of guilt!  That has to be a miracle!

However, be warned …. this is not a job for the faint-hearted.   It really is hard work and once begun, Marie recommends sorting out one category at a time and not stopping until the entire house is done.  All up, it took me a couple of months.  I started with my tee shirts and donated two-thirds of them immediately.  Everything that I have kept, I love.  The strange thing is that I have no desire to replace anything that I have discarded.  Although, on second thoughts, maybe not so strange, as I was probably only wearing the ones that I kept anyway!  Along the way, I discovered a couple of forgotten brand-new items still with tags on and somehow it seems that I had unknowingly bought two identical tee shirts!  How did that happen? 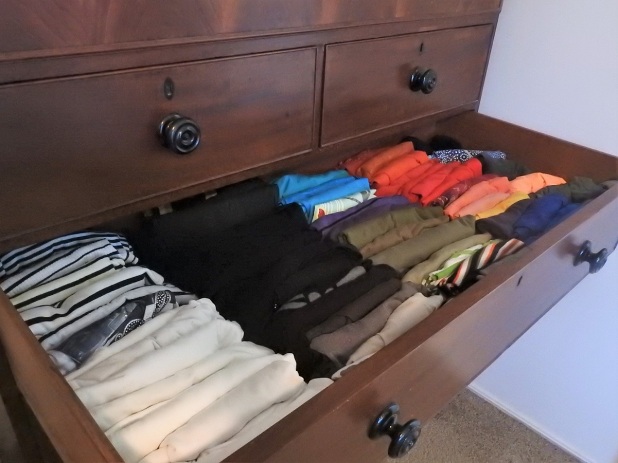 Obviously I don’t need to buy any more black, white or striped tees for a long time!  There’s even room for the yoga gear on the far right.

What if you are the only one in the family who wants to give this method a try? It’s very achievable;  Marie covers that as well.

Because of space constraints in Japan, Marie recommends folding a lot of things for which she has certain techniques, for example, underwear.   I followed her instructions, even to the extent of arranging them in colour order, light to dark, so now I can see at a glance what I have instead of searching through messy, untidy drawers.  Tea towels are now folded and stored in shallow baskets.  No more storing items in piles where the things on the bottom never see the light of day.

Easy tea towel storage – put in at the back and take out from the front!  A year on and still looking neat.

When it came time to sorting out all my cleaning gear, this involved collecting it from everywhere in the house, putting it in a pile on the floor and going through it all individually.  I’m always running out of paper towel in the kitchen and much to my surprise,  found a forgotten supply in the laundry!  How long had that been there?  Now I store the paper towels all in one spot.  That is one of the benefits of sorting by category, rather than by one room at a time.

This method is so different from anything I’ve tried in the past, which usually involved buying yet more containers to fit into every nook and cranny,  and I was surprised to discover that this particular decluttering book was a bestseller and the Konmari Method is well known in many countries.  Some research about Shinto beliefs helped to clarify what Marie was referring to when she writes about respecting possessions and thanking them for the work they do for us.  Yes, I must admit that I thought this sounded a bit “out there” at the time, but now I understand that in Japanese culture, inanimate objects have a spirit, so hey, if thanking them (silently, in my case!) helps me to respect my possessions and be more organised, I don’t have a problem with that.

I don’t know why, but just reading this book makes you want to get started straight away, and Marie goes into such depth, it’s like having her at your side as you embark on your tidying “festival“, as she puts it.

I went on to read the second book, “Spark Joy” which is an illustrated Master Class.  So when it came to organizing socks, it felt good to smooth each one out and fold them neatly into three instead of those horrible, tight balls I was responsible for.  I must be getting into Marie’s mindset – while I worked I started to think how much they (the socks) would appreciate it!  No hope for me now!!  The thing is, though, it works!

After completely filling my entire car three times I stopped counting, as I took unwanted possessions to the op shop.  I sorted out my craft studio – sold all my jewellery making gear that I was no longer interested in and donated at least 4 bags of craft books, not to mention the collection of unwanted dressmaking fabric.  The result is that I now have much more space for everything that I actually use and I was able to donate a huge pile of containers to the charity shop, for which they were extremely grateful.

So what have I learnt on my “tidying”journey?

Obviously, I have embraced these books and feeling very happy and empowered with what I have achieved.  I highly recommend reading them, but just as one size doesn’t really fit all, this method may not be for everyone as you will see from some of the reviews.  You need to (as a Westerner) be prepared to read them with an open mind. Some people have not and a few of the comments were a little bit unkind (in my opinion anyway).  That’s also the reason why I waited so long before jumping in with my opinions.  I wanted to see if it worked long term or would I go back to my previous untidy habits?

Well, the “tidying” took place nearly a year ago, and the result?  Very happy to say that all the hard work has paid off.  It was amazing how quickly I forgot about the mountain of stuff that I donated, sold, gave away or threw out and it hasn’t been replaced.  No regrets and no more “spring cleaning” – ever!  I’d say that it’s been a big success, wouldn’t you?

6 thoughts on “Find the Joy”